Miombo has since its start-up as an NGO involved itself with cookstoves and cookstove fuel. The idea is that cookstoves serves as an entry-point to several development goals. One of them is household energy.

Household energy in African countries is dominated by the use of charcoal. Typically an African household consumes biomass as charcoal or fire wood of around 95% of the total energy consumed in the household.

Charcoal is a dominant trade commodity. It is produced for use in rural areas and for transport from rural to urban areas. In order to cover demand among households, forests are cut at a high rate and converted to charcoal in an in-efficient process with high energy losses (60% to 70%).

Charcoal has a favourable cost to benefit ratio, giving it a large market among households. It is difficult for sustainable renewable biomass solutions to effectively compete against charcoal.

Households demand charcoal at high rates causing deforestation in many countries. New treeplanting is not adequate to cover for the losses caused by charcoal production and other practices causing forest losses.

In Zambia Miombo NGO and Miombo AS have been engaged with cookstoves and cookstove fuel since mid 2000. The activities have origins in work that personnel at Miombo carried out in the late 1990'ies.

In 2011 Miombo NGO on contract for the Norwegian Geotechnical Institute operated a small pilot project, placing a small number of Peko Pe cookstoves with farmers at three locations in Zambia. The Miombo end report gives details on the placement.

As a follow-up on the NGI project, Miombo AS teamed up with Ensis Development in 2012 on an EEP funded project (The Energy and Environment Partnership Programme of Southern and East Africa). The project procured and installed one pelletizer for production of pellets during the project with distribution to and sale in Kitwe and Lusaka. The project established two manufacturing facilities for the Peko Pe cookstove, one in Kamfinsa outside of Kitwe and one in Lusaka. The cookstove facility at Kitwe used prisoners, while the Lusaka unit used disabled individuals. A factsheet on the project is available here.

We look upon honey production as an extension of our activities on cookstoves and cookstove fuel.

Honey is a product of the forest and honey production provides a significant income to forest dwellers. Bees are an important component in the forest eco-system and fits in very well with the Miombo circular concept of sustainable resource use.

We have purchased a number of bee-hives and placed them in the field in Zambia and we have plans for a scale up of this operation.

A pellet and cookstove purchaser leaves the sales outlet at Kuku Road in Chawama compound, Lusaka. 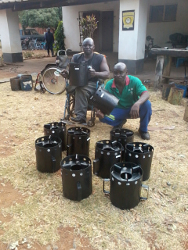 We have successfully used disabled individuals in cookstove production.